People tell us to face reality.  Admit that all is lost, meaningless, and despairing.

Question:
Is the Miley Cyrus of age 23 more real than the Hannah Montana of age 13?  If innocence is restored to her in her 30s, will her gritty stage have been the "most real" version of her? 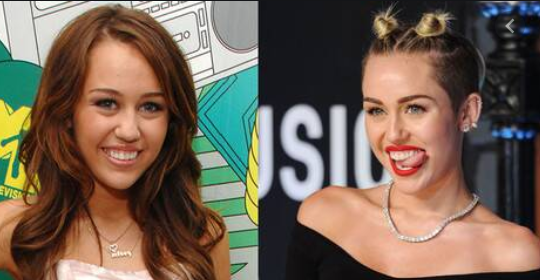 I don't know the first thing about the condition of her soul, but just work with me as to exterior appearances for a minute.  There are those who will tell you that departure from innocence is prerequisite to facing reality.

I'd go square opposite to that, though, and without blushing.  I believe that we were intended for innocence and when we become more innocent we are returning to appropriate reality.  That the grit and despair is actually not the deeper magic, but a lie that is fed to us by an enemy of our souls.

Staring at a polluted puddle doesn't tell you more about the water cycle than cupping your hands at a glacial snowbank.  Grit and despair doesn't indicate that you're looking at a life more REAL.

Life is good. God is real (not made more so by my affirming it).  Grit is a pollutant.  Despair is less true than hope, not the other way 'round.
Posted by Tim Chase at 8:33 AM