10 Reasons NOT to Oppose Marriage Equality

Judgment (eating from the tree of the Knowledge of Good and Evil) is strictly forbidden to humans.  Even when something is clearly off-limits according to the Scriptures you read, please keep your mouth closed* and let the Holy Spirit do the work He wants to do and in the order He wants to do it.  Who knows but that the Righteous Judge might render a different judgment from what you would do in His place?

Keep out of the Judge's bench.  Do not try on the robe.  Do not handle the gavel.

*Admittedly there is a time to approach a Christian brother with a sin-concern, and to this I can only say "tread so carefully--tread so lightly--keep judgment far from you and watch your posture on that day when you do approach your brother about sin.  Oh, tread softly."

The graphic below, and the current hoopla over marriage equality, is what drove me to write about judgment above.  Is it clear to you how they're connected?  If you're going to talk to someone about an emotionally-charged issue like same-sex marriage, you must keep yourself from the black-powder of judgment or the only friends you'll have when the smoke clears will be the ones standing behind you.

I can appreciate the sense and wit of the graphic below, even if my ultimate conclusion isn't that of its creator, clearly a marriage-equality advocate.  It's worth reading and then taking careful stock of  appropriate arguments for and against defining marriage more inclusively. 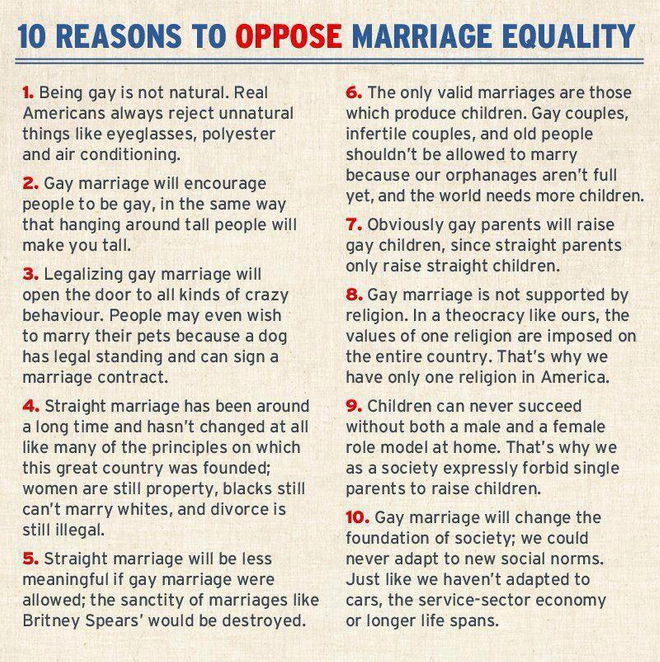 I was feeling kind of left out. When I typed in "Tim Chase Heretic" on Google I didn't get any relevant results, which means I'm not famous enough to have one of the self-appointed watchdog organizations apply the H-brand to me. Yet.

CS Lewis, Bill Johnson, and Greg Boyd are some of my favorite unrepentent heretics.  I also admit to thinking highly of Tony Campolo, Ted Haggard, and Donald Miller, and--with reservation--Rob Bell.  In each of those cases I've spent some considerable time studying the accusations against them and am usually pretty alarmed at the mean-spirited videos and articles that are aimed at "bringing truth and light."  These watchdogs set out looking for dangerous heresy and found themselves in equally dangerous hysterisy.

Then this weekend I happened to be at a church that has taken The Shack off their shelves because of accusations of heresy that have lapped up on their shores.  The Shack, heretical?  Until a month ago I hadn't re-read The Shack since my first exposure in 2008, though several times I've handed the book to friends and have recommended it on our church website: www.sgfbend.org/our-flavor.  This winter when I finally had a chance to read it a second time, I did so with a very fine-meshed theological screen.  I approached it from the standpoint of 1) knowing that it's a good and important message, but that 2) it deals with some pretty messy theological areas.  I wasn't going to burn the book if I found theological error in it (I'd already benefited too much to want to do that), but I wanted to know for myself what small error it might contain. (Remember, this is before I'd heard of accusations of heresy.)

I read it with cheese-cloth filter, alert for problematic areas.  I re-read several passages because I thought there might be a problem, but my most careful reading exonerated those passages.  To my own surprise, I had finished the The Shack and had nothing on my notepad of "problem areas."

Yesterday I read part of a heresy-rant book Burning the Shack, and I now realize that sometimes WHO wrote something is as important as WHAT he wrote.  I still feel comfortable with The Shack, in part because of the editing and writing team that collaborated on it.  I'm not at-ease with the doctrine of universal reconciliation, and I'll watch for it in any future novel I read from Paul Young and others, but this unease probably won't compel me to start a new blog called www.watchdogs4jesus.com to track my findings and alert others to slippery-slope theology.

Until yesterday I had never even thought to try a Google search for "Paul Young Heretic."  Wowie!  He is some kind of bad guy!  Curiosity.  How about the other guys we like?  Turns out that more than half of the people I've listed on SGF's "our-flavor" page are Heretics (the kind that make one capitalize the word).  The others on my list probably aren't famous enough for the brand.


Q) How do we keep ourselves safe from the deception of heretics?

Q) How do we keep ourselves safe from the heresy-sniffer watchdogs?

A) Chose any one of these:

My dad and I were engaging this morning in a fun conversation about the heretics that we appreciate, and we decided to do some Googling to try to find a prominent Christian leader who hasn't generated a nice wad of angry heresy-accusations.
Try it for yourself.
Who do you follow who hasn't been blasted for heresy?

Beneath the bravado of self-labeling as Heretic in the post-title, I don't want to really engage in heresy. While I believe that there are far fewer actual heretics actually doing damage to the faith than alarmists would have us think, I'm not disappointed to find that I'm still as orthodox as ever.  Here are two good litmus tests (can you affirm the articles of both?):

The Devil Hates My Kids

Last night I found my son crying in the tent-fort he'd made from his blankets.  Sometimes I ask "what makes you sad?" but this time I asked another question: "What negative phrase is looping in your brain?"

I had seen what had triggered him.  He was reading the report card and noting every area that indicated an imperfection.  Needing improvement in the "organization" department means that he's a 4th grade boy--it shouldn't mean that you put your chin on your chest and slink to your room like a beaten puppy!

So I knew what had caused him to be sad, but I also suspected that it would be something more "core" than dismay at his report card.  When he looked up at me I asked again "What negative tape is playing in your head?"

His answer stunned me.  It was almost word-for-word a negative tape that had played in my own brain for 30+ years until I did a LifeChange Weekend last September.  Did he inherit from me?  Let's break this off right now!

"It's difficult to love me."

That's my negative tape, not his, but his is very similar.  Jesus encountered me last September and helped me into a new identity.  I am no longer cursed with the mental refrain of "unlovable."  I have broken free!

Let's not have my son listen to this negative tape for 30 years and then break it off.  Let's go after it when he's a little guy.  He's just a kid.  Why does the Enemy take advantage of us when we're weak? Why attack little kids?!

There are appropriate scriptures that help answer this question.  Name one in the comments?

[If you'd like to join us for any of our Easter-week celebrations, starting next Thursday night at our house, let me know.  We'd love to include you!]
Posted by Unknown at 9:55 PM 1 comments