Who do you say that I am?

Jesus said to them, "But who do you say that I am?"

We'll come back to Jesus' words at the end, because they mean more when you have some context of labeling of "identity" to another person.  Who do other people say that we are?

Have you seen what happens when one person sticks a label on another?  It's usually bad, as in "you'll always be this way" or "you can't do anything right" or "you're a greedy slouch."  For me, the identity-label that I walked around wearing for several decades wasn't one that was ever said out loud, I think, but a devil suggested it and I repeated it in my head on a looping track for years: "I'm difficult to love."  (this may not sound bad to you, but it was a huge life-impediment to me)

One of my acquaintances told me that the repeating loop in his head was originally voiced by his mother in a negative reference, and it got him stuck for 40 years: "You're going to turn out just like your father."  Another friend told me that his lifelong repeating loop was "I'm a pervert"--and the original label had come to him when he was age 10.  Neither of these men consciously embraced the label, but an authority in their lives had given it to them and they found themselves in a repeating loop with it.

[Obviously sometimes a person can try to give you a label but it doesn't stick.  Is that because labels require the Identified to apply his own adhesive?  The Identifyer issues the label, but the Identified is the one who either takes it or dismisses it, based on who the Identifyer is?  Why do some labels stick?]

If you haven't seen The Snoodle's Tale recently, please take a couple of minutes to go remind yourself or see it afresh: it ought to be available HERE or HERE.  In this short cartoon video, the young Snoodle is the Identified and the older Snoodles are the Identifyers.  Finally, our hero meets the man in the cave, who releases him from the labels that have weighed him down and then gives him a new identity.  It's an important story.  My favorite line is when the man in the cave says: "Here's how I see you," and hands the Snoodle a new identifying painting.  Amazing.  Chills. 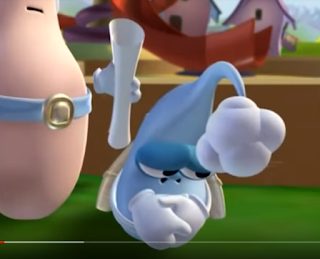 Okay.  By now we have it that in each of these interactions there is an Identifyer and an Identified, right?  And always which person is moved? ... it's the Identified who changes, right?

So Jesus asks us his classic Identifying question.  "Who do you say that I am?"

Humans have to be careful with this question.  Don't go asking just anybody!  Who moves when a human asks the question, after all?  The one asking the question!  The Identified.

And then Jesus asks it.  And it's different.

For the first time in history, it's about to be the Identifyer who is changed by the issuing of an identity label, instead of the Identified.  God doesn't move, and the identity-label-mechanics react explosively when applied to his immutable Diety.  I say to Jesus "You are Lord" and it's like an explosion, but I'm the one who changes.  I say to Him "You're a good, good Father" and I change again.  The saints in heaven sing "The Lamb is Holy" and their identifying of Him is worship.

Jesus asks us to identify him.  Who do you say that He is?


When you listen to a teaching or read a book ... and the teaching is hard. What do you do with the lesson?

But first, this is the song of my heart lately:

Okay, back to the idea of what happens when the teaching du-jour GRATES on your heart. You do NOT like it, agree with it, etc. What do you do? 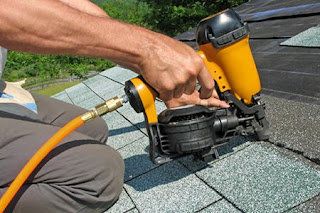 Some of my tools have carbide tips. This bit of carbide is incredibly hard and makes the tool or blade much longer-lasting. An example: if you have a regular nailer or stapler and you use it to put on a composite-shingle roof, you will probably need to replace the tip after just one roof because the hard, rough surface of the shingles will wear it out. But if it's a hard-weld or carbide tip, then you're all good, because the carbide tip won't have been scratched all to pieces by the sharp, rough roofing surface. The carbide tip is untouched.

I have other tools that are made of softer metals, like aluminum. If I want to scratch my initials into an aluminum speed-square, it's no problem--the metal will yield to my manipulations.


It's not an easy question! If I have a carbide heart, pride is crouching at my door. The Bible says "Do you see a person wise in their own eyes? There is more hope for a fool than for them."  It's easy to see this, right?  If I am reading a book or listening to a teaching and all the while saying to myself "No, it's wrong; this message has nothing for me; I will not listen; I will not change..." then it's very probable that I'm acting in pride or at least oriented that direction.  It's not good.

On the other hand, if I don't guard myself from false teaching, then I'm also violating Scripture: "continually be on your guard so as not to be led astray by the false teaching..."  That's clear, too.  I need to read and listen with a filter in place, constantly testing ideas to see how they mesh with Scripture and my own experience with things of God.

Here's my own solution.  (I'm curious what you have done about this problem, too.)  I swap out different mental filters depending on whom I'm receiving from.

Small Filter
When I'm visiting a church and sitting under a message from a teacher I don't already know, the filter I use is a small-diameter screen.  If the things that are coming from the pulpit are matching my understanding, then I accept them (of course!--there's no conflict!).  If what is being said seems a little sideways, I put it aside.  Sometimes I'll quarantine an idea to examine later, sometimes I'll quarantine an idea with no intention to ever come back to it, and sometimes (very rarely) I'll quarantine an idea with the intention of providing push-back in some way.  I'm not going to let my carbide-tipped heart get dented/scratched by just anybody!

Large Filter
But.  When the person speaking to me is one that I've given authority to in my life, such as my pastor or my friends, then the stuff that I allow "in" can be much larger in diameter.  I allow these thoughts in and they have the right to displace my own opinions.  I'm "dented" by thoughts I didn't agree with, but which are presented by an author or speaker who has the authority to dent or scratch my beliefs.  I don't show the carbide heart to these people--that wouldn't be wise.

But here's the challenge.  Do you have people in your life to whom you do show your malleable heart?  If you find that you resist instruction (teaching that changes your beliefs) and that uncomfortable teaching is always met with a small filter, a quarantine, and carbide heart, then my challenge to you is to find someone from whom you can trust to receive instruction from, and then actively turn your heart to be receptive.

Do I have teachers who are allowed to displace my ideas?  Yes.  If I'm reading one of them and they espouse an idea that I don't agree with, I take it very seriously.  I do not lightly set it aside into quarantine, but place my own idea into quarantine instead!

Grateful for the Setup Crew

Today I'm visiting my old stomping grounds at Desert Streams Church.  We signed up to pray at the 8am slot on a Sunday morning during the round-the-clock prayer time this winter, and not long after we got here this morning the musicians began coming in, opening their guitar cases, and quietly going about the business of getting ready to lead the morning worship service. I used to be among those who parked in this church's parking lot when it was mostly empty.  I referred to ourselves as the "cast and crew" of the Sunday services.  It was a responsibility, and I embraced it for the sake of service to God, but I remember I didn't like the feeling that it was a performance that required a cast and crew.

Anyhow, this morning I was impressed that these musicians and two guys on the sound board were ready for mic tests promptly 90 minutes before the 10am service time.  And thankful for them.  Grateful.  I do feel that such a sacrifice of time is "pleasing and acceptable" to the Lord.

Nowadays I don't go to Sunday morning services.  I meet with my church on weeknights or for brunch on a weekend.  The cast-and-crew aspect of such meetings is little more than making sure the house is clean and food is planned for.  (And I organize children's ministries, so that, too, is time that I offer to the Lord in the service of the church.  And sometimes I blog.)

I enjoy the overall reduction in work, but I'm clear about this: I didn't go to home-church structure to spend LESS overall energy on the Kingdom.  If I don't meet at the church twice a week anymore, but that means that I do more emailing and meeting for coffee.  I don't sit in Sunday morning sermons anymore, but that means that I pursue Godly teaching in other means (podcasts, books, youtube vids, etc).  Home church is more flexible, but it's not less.